Make sure you right-click on links and open them in a new tab or window so as to keep this blog on-screen.

The annual Cardiff 'Gay Mardi Gras' is taking place in Bute Park on Saturday 4th September.  It largely consists of a mixture of politically-correct and indecent stalls with a stage on which some lack-lustre acts (the organisers can't or won't name even one) will perform.

There will be a Christian Voice outreach outside, which we call an evangelistic prophetic witness: standing up against this ungodly event and at the same time using it as a spring board for evangelism.  Apart from those suffering from same-sex attraction, quite a few young heterosexual young people, mainly girls, come to the Mardi Gras in the misguided notion that it is cool and harmless.  I hope and pray the redeemed will come and share testimony with the lost, for the furtherance of the Kingdom of God.

We shall meet at the gates to Bute Park in North Road opposite Boulevard de Nantes at 11.30am on Saturday 3rd September.  MAP HERE.  There is car parking in North Road outside the park.  We shall evangelise with leaflets and in one-to-one conversations from about 12 noon to say 3pm or 4pm or whatever you can manage.  If you are a bit late, or have to leave early, that is not a problem. 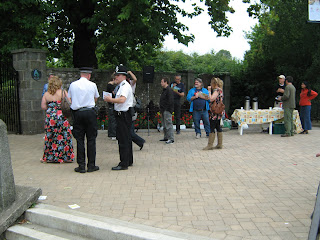 In 2006, this writer was arrested, thrown in the clink for four hours and charged with a public order offence by South Wales Police.  There was massive publicity, SWP were sued for wrongful arrest, false imprisonment and malicious prosecution and they settled out of court.  An officer we met at the event in 2007 said SWP learnt their lesson after that.  So this will be an entirely peaceful and legal witness with good conversations expected and by the grace of God miraculous conversion on the devil's doorstep.
Even in this time of cut-backs to services, Cardiff City Council are sponsoring the Mardi Gras, maybe because Cllr Rodney Berman, leader of Cardiff Council, is himself openly homosexual and according to Pink News among the top 50 influential homosexuals in Britain in 2009 (he was 46th).  Earlier this year, Cllr Berman joined a failed campaign to keep open a seedy gay pub in Cardiff.
PRAY: (1) Pray for a peaceful, lively, blessed and successful Gospel outreach on Saturday week. May souls be saved from the day of wrath and welcomed into His kingdom, by His precious blood.
(2) But much as we want to reach out to sinners with the Gospel of grace, pray that this event is a financial disaster and that, as in 2008, it is washed out!
May the Lord grant all who are coming along travelling mercies and may He bless all our efforts for His name's sake.
READ: Ezek 33:8 When I say unto the wicked, O wicked man, thou shalt surely die; if thou dost not speak to warn the wicked from his way, that wicked man shall die in his iniquity; but his blood will I require at thine hand. 9 Nevertheless, if thou warn the wicked of his way to turn from it; if he do not turn from his way, he shall die in his iniquity; but thou hast delivered thy soul. ... 11 Say unto them, As I live, saith the Lord GOD, I have no pleasure in the death of the wicked; but that the wicked turn from his way and live: turn ye, turn ye from your evil ways; for why will ye die, O house of Israel? (KJV)
2Tim 4:2  Preach the word; be instant in season, out of season; reprove, rebuke, exhort with all longsuffering and doctrine.
Jude 1:22 And of some have compassion, making a difference: 23 And others save with fear, pulling them out of the fire; hating even the garment spotted by the flesh.
Posted by Christian Voice at 15:34 No comments:

Christian Voice
National Director of Christian Voice which is by the grace of God a radical, Biblical, forthright, Christ-centred ministry calling for national repentance in the United Kingdom and working for Godly government.